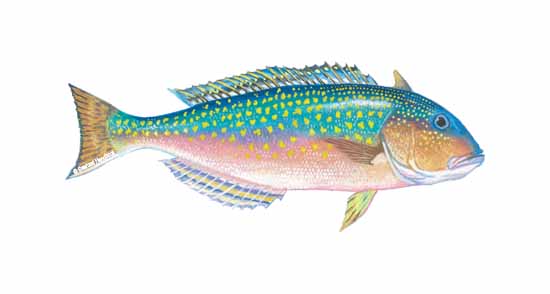 The colorful tilefish, known as the “clown of the sea,” may look like a tropical species, but it is found from Florida to as far north as Nova Scotia. Tilefish inhabit a narrow stretch of ocean floor in a band of warm water along the upper reaches of the continental slope. The major fishing grounds are off eastern Florida, southern New Jersey and the tip of Long Island, N.Y. Fishermen target tilefish with longlines; it is a selective fishery with little bycatch. Whether from Miami or Montauk, almost all tilefish is sold fresh, graded and priced by size: The bigger the fish, the higher the per-pound price. But just because smaller tilefish are less expensive than large ones, that doesn’t mean you’ve got a bargain. The smaller fish have a shorter shelf life, and their flesh tends to be softer. Tilefish can grow up to 4 feet and 80 pounds, although 5 to 10 pounds are average in the commercial catch. Fish from deeper waters dine primarily on crabs, giving them a firmer texture and sweeter flavor than those harvested in shallower waters.
This species is sometimes called the rainbow tilefish for its lovely blue, green, rose and yellow coloration. Out of the water, the colors fade.Tilefish yield thick fillets with a row of pinbones. The raw meat is pinkish-white but cooks up white with a firm, flaky texture. The flavor is mild but distinctive, often compared to lobster or crab, which is not surprising, since the tilefish’s diet is largely crustaceans.
Firm and mild-tasting, tilefish offers chefs many options. Pan searing is a good choice of methods, since tilefish holds together well, a quality that also makes it good in soups and stews. Cook the thick fillets at a high initial heat to help seal in juices and keep the meat moist. With its firm texture and clean taste, tilefish also is a good candidate for sashimi or sushi.
Monkfish, Snapper, Grouper

Mattes Seafood has been working with Libertore’s in Perry Hall for years. The service provided by Michael Mattes and his company are always exceptional. We have never incurred any problems, we know we can always call even if it is last minute and we will be taken care of. We couldn’t ask for a more reliable vendor. All of their products are always delivered fresh and they are completely able to meet our needs! We are more than happy with the service provided and would love to continue to work wi… END_OF_DOCUMENT_TOKEN_TO_BE_REPLACED