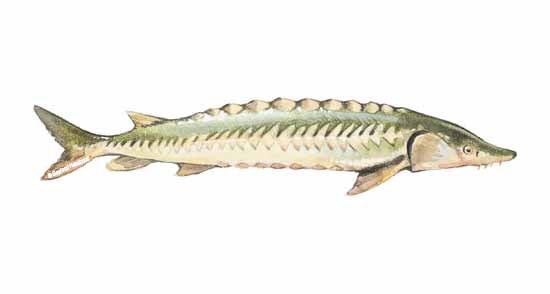 The prehistoric sturgeon was once abundant in the United States, consumed on both coasts and exported to Europe, where the roe was processed as caviar. By the end of the 19th century, stocks had collapsed, and today, wild fish are almost impossible to obtain. Of the seven North American species of sturgeon, only two — white and green (Acipenser medirostris) — are still harvested on the West Coast on a very limited scale. Most sturgeon now on the market is white sturgeon, farm-raised in California. Said to resemble the famed beluga, white sturgeon is prized for its superior flavor. Though wild fish lived for 100 years and reached weights of 2,000 pounds, market size of a full-grown farmed sturgeon is 18 to 22 pounds. The fish are cartilagenous, with no internal skeleton. Instead of scales, they have rows of sharp, bony shields or plates, called “buttons,” along their bodies.
As farmed sturgeon are raised in controlled environments, quality should be consistently good. Wild sturgeon can vary in flavor, depending on their diet and whether they are caught in brackish or fresh water. Farmed white sturgeon has a mild, delicate flavor, less pronounced than that of green sturgeon.The lean flesh is firm and meaty, similar in texture to chicken breast or veal. Raw sturgeon is pale pink and cooks up white. The tough skin is inedible.
Sturgeon is a good fish for meat or chicken eaters because of its solid texture. Use it in recipes calling for veal. It also marinates well. A simple recipe from one sturgeon farmer calls for sautéing sturgeon fillets after seasoning with salt, pepper, lemon juice and Worcestershire sauce and rolling in flour. Sauté in hot butter only 2 to 3 minutes per side. Overcooking will toughen sturgeon.
Tuna, Swordfish, Shark

Mattes Seafood has been working with Libertore’s in Perry Hall for years. The service provided by Michael Mattes and his company are always exceptional. We have never incurred any problems, we know we can always call even if it is last minute and we will be taken care of. We couldn’t ask for a more reliable vendor. All of their products are always delivered fresh and they are completely able to meet our needs! We are more than happy with the service provided and would love to continue to work wi… END_OF_DOCUMENT_TOKEN_TO_BE_REPLACED