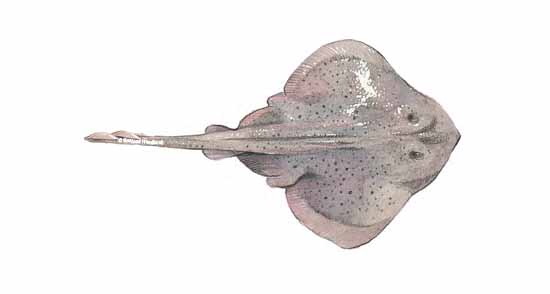 The bottom-dwelling, kite-shaped skate is found worldwide in temperate and cold waters as well as in deep, tropical waters. Skates are taken with longlines and gillnets, both as a targeted fishery and as bycatch. Fresh skate landed in winter is considered the best. Only the wings of the skate are eaten. It was long believed that skate wings were cut up and sold as scallops. However, experts note that the skate’s cartilage would make the process economically infeasible. Like sharks, skates have no bones, but rather a skeleton of cartilage. Most skates are brown or grayish. Skates are commercially harvested on both coasts of North America.  East Coast skates include the clearnose (R. eglanteria), barndoor (R. laevis), little skate (R. erinacea), winter skate (R. ocellata) and the thorny skate (R. radiata). Pacific Coast skates include the big skate (R. binoculata), California skate (R. inornata) and the longnose skate (R. rhina), among others.
Skate has a mildly pronounced flavor similar to scallops. The flesh is soft but firms up after it has been chilled. Raw meat has a slightly off-white, sometimes pinkish, color and cooks up off-white.The meat of the wings, the only edible parts, has a striated, open-fan configuration. Because of the wing structure, skate has a stringy texture. Each wing produces two fillets — one from the upper side and one from the lower.
The wings are composed of strands of flesh, a layer of cartilage and then more strands of flesh. The meat can be removed from the cartilage after it’s cooked, though cooking does soften the cartilage. Skin should be removed before cooking. Try poaching skate in liquid made of water, wine vinegar, a thinly sliced small onion, a bay leaf, parsley and thyme. Serve with browned butter to which capers have been added.
Scallops, Flounder, Rockfish

Mattes Seafood has been working with Libertore’s in Perry Hall for years. The service provided by Michael Mattes and his company are always exceptional. We have never incurred any problems, we know we can always call even if it is last minute and we will be taken care of. We couldn’t ask for a more reliable vendor. All of their products are always delivered fresh and they are completely able to meet our needs! We are more than happy with the service provided and would love to continue to work wi… END_OF_DOCUMENT_TOKEN_TO_BE_REPLACED