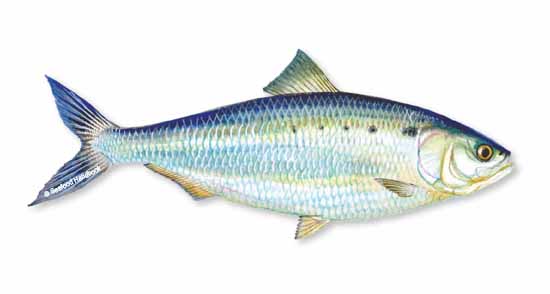 American shad, the largest member of the herring family, is widely con­sidered the tastiest of the world’s 31 shad species; the species name (sapidissima) means “most delicious.” Shad is a seasonal novelty on restaurant menus, and shad bakes are a rite of spring in many Mid-Atlantic communi­ties. John McPhee’s 2002 book The Founding Fish, which recounts a wealth of shad lore and eulogizes the fish’s role in America’s history, fueled a surge in the fish’s popularity with anglers and diners. Shad roe, the ripe eggs of the female fish, has been lauded as the “foie gras” of seafood.The species is anadromous, living at sea and migrating up rivers only to spawn. During spawning runs, fish are commercially caught with gillnets. Market size is typically is 3 to 5 pounds. Key fisheries are on the eastern U.S. coast, from Florida to Maine, with the biggest spawning runs in the Hudson River. Although shad is abundant along the Pacific Coast, there are no major commercial fisheries there due to concerns for native salmon. Dams, pollu­tion, overfishing and predation have decimated the East Coast commercial shad fishery. Restoration efforts, including the phase-out of coastal inter­cept fishing, are ongoing.
The raw flesh of American shad appears grayish. Cooked, it varies in color from pinkish beige to deep brown, with the darker flesh the most richly fla­vored. The large roe sacs are bright orange.Shad meat is sweet, rich and tender, with high oil content. Fans refer to the flavor as “poor man’s salmon.”
The bony shad was described by one Native American tribe as “a porcupine turned inside out,” which can make whole shad a challenge to eat. However, slow cooking (steaming or baking at low temperatures) dissolves the small bones. Fillets, broiled or baked, are a more popular choice. For an update on traditional “planked shad,” boned fillets are nailed to an oak or hickory board, along with bacon slices, and slow cooked before a charcoal fire. Shad roe can be sautéed in butter or braised in white wine.
Mackerel, Salmon, Bluefish

Mattes Seafood has been working with Libertore’s in Perry Hall for years. The service provided by Michael Mattes and his company are always exceptional. We have never incurred any problems, we know we can always call even if it is last minute and we will be taken care of. We couldn’t ask for a more reliable vendor. All of their products are always delivered fresh and they are completely able to meet our needs! We are more than happy with the service provided and would love to continue to work wi… END_OF_DOCUMENT_TOKEN_TO_BE_REPLACED