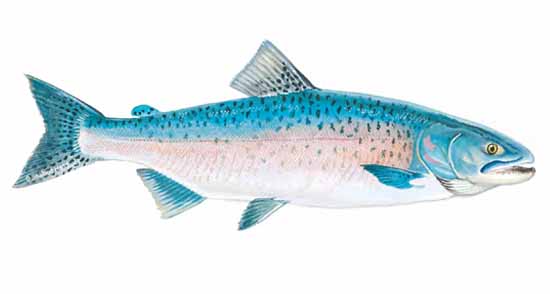 The “can-friendly” pink is the smallest and most plentiful of the wild salmon, accounting for the lion’s share of the canned pack. That pink salmon mostly winds up in cans is due partly to its habit of showing up in huge schools during short periods of time and requiring rapid, high-volume processing. However, pinks are increasingly entering the fresh and frozen markets. And some canners have taken a step forward with boneless, skinless pink fillets packed in a retort pouch. The male pink’s pronounced hump at breeding time has given the fish its colloquial name, “humpback.” Pink salmon can weigh up to 12 pounds, but the range of those caught commercially is 2 to 6 pounds. Pinks are found on both sides of the North Pacific, from Puget Sound to Alaska and from Russia to North Korea, including the Bering Sea. They are taken by gillnets and seines and by trolling. They are not farmed.
A generally lean and mild-flavored fish, pink salmon has meat that is low in oil and small-flaked. As the name implies, this salmon’s flesh is truly pink. The color is paler than the meat of the other salmon species and lacks the orange tint. It also has softer meat than most salmon.Pink salmon eggs are the second most valuable (behind those of chums) for salmon caviar.
With their low fat content, pinks don’t grill as well as other salmon. Whatever cooking method you choose, it’s important not to let the lean meat dry out. Cook with moist heat or baste frequently while cooking. Pinks also work well in chowders, sandwiches, pasta preparations, casseroles and salads.
Chum salmon, Rainbow trout

Mattes Seafood has been working with Libertore’s in Perry Hall for years. The service provided by Michael Mattes and his company are always exceptional. We have never incurred any problems, we know we can always call even if it is last minute and we will be taken care of. We couldn’t ask for a more reliable vendor. All of their products are always delivered fresh and they are completely able to meet our needs! We are more than happy with the service provided and would love to continue to work wi… END_OF_DOCUMENT_TOKEN_TO_BE_REPLACED