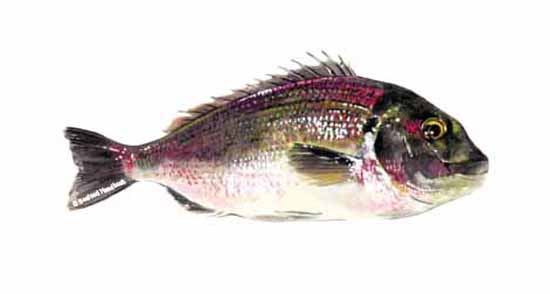 The name “porgy” comes from an American Indian name meaning “fertilizer,” a common use for these abundant fish during Colonial times. While porgy is the preferred name for the species in the United States, where it is sold mainly in ethnic markets, in Europe it is called sea bream. About 15 species of porgy, including members of the Sparidae family of sheepshead and scup, are found on the American side of the Atlantic. They range in size from 1/2 pound to 20 pounds, though market-sized fish weigh 3 pounds or under. The largest is the red porgy (P. pagrus), found on both sides of the Atlantic Ocean. It is caught by hook and line and trawls and is also a popular recreational fish in the United States. Argentina is the world’s major red porgy producer and sells frozen fish to markets in Europe, where the fish is highly regarded. Uruguay and Brazil also have commercial red porgy fisheries.
Red porgy has white, tender meat with a large flake and mild, sweet flavor. It has been compared to snapper in taste and texture.Porgies contain lots of small bones, which makes them difficult to fillet.
Porgy is a versatile fish that can be used in many preparations, and its mild flavor works well with a variety of flavor accents. Dressed fish and steaks can be stuffed and baked. Whole fish are good cooked on the grill or oven roasted; these methods soften the bones and allow the meat to slide off them more easily. Porgies can have tough, hard-to-scale-skin. It’s easiest to have the fish scaled before buying.
Snapper, Croaker, Grouper

Mattes Seafood has been working with Libertore’s in Perry Hall for years. The service provided by Michael Mattes and his company are always exceptional. We have never incurred any problems, we know we can always call even if it is last minute and we will be taken care of. We couldn’t ask for a more reliable vendor. All of their products are always delivered fresh and they are completely able to meet our needs! We are more than happy with the service provided and would love to continue to work wi… END_OF_DOCUMENT_TOKEN_TO_BE_REPLACED