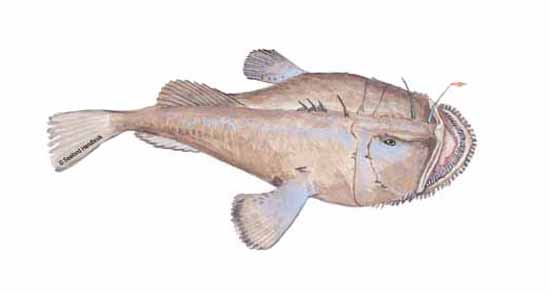 By all accounts, monkfish is one of the ugliest fish in the deep, having a huge head, tiny eyes and an enormous mouth filled with needle-like teeth. On top of that, to lure other fish into its grotesque mouth, it is equipped with a peculiar apparatus that looks like a spike with a bit of meat on it, which it waves back and forth to entice its prey. Obviously not intended for the display case, the whole fish rarely makes it ashore, since fishermen generally remove the tail and liver at sea and throw the rest back. Tail meats range from 1 to 4 pounds. Most of the livers are exported to Japan, where they are used in soup. Monkfish are found worldwide, but the primary harvesting areas are in the North Atlantic from coastal Norway to the Mediterranean and from the Grand Banks to North Carolina. U.S.-landed monks are taken by trawlers and gillnets and as bycatch from scallop draggers.
Monkfish has a mild, slightly sweet taste. The tail meat, the only part of the fish that is used, is firm, dense and boneless. It doesn’t flake readily and is firm like scallop or lobster meat.The raw flesh is off-white to pale gray, covered with a blue-gray membrane; cooked meat is white. With headless monkfish, blood is a sign of a recently caught fish. Dried up or brown-colored blood indicates a fish that’s started to age. Don’t accept tails when the edges of the meat are discolored or there’s a fishy odor.
Mild yet very firm, monkfish is highly versatile and benefits from zesty marinades, seasonings and sauces. The firm texture of monkfish means you don’t have to worry about the meat falling apart on the grill or in chowders. Buy slightly larger fillets than for other fish, because the meat loses moisture and shrinks when cooked. Use poached monkfish to stretch a lobster salad (the monk is known as “the poor man’s lobster”).
Halibut, Lobster meat, Scallops

Mattes Seafood has been working with Libertore’s in Perry Hall for years. The service provided by Michael Mattes and his company are always exceptional. We have never incurred any problems, we know we can always call even if it is last minute and we will be taken care of. We couldn’t ask for a more reliable vendor. All of their products are always delivered fresh and they are completely able to meet our needs! We are more than happy with the service provided and would love to continue to work wi… END_OF_DOCUMENT_TOKEN_TO_BE_REPLACED