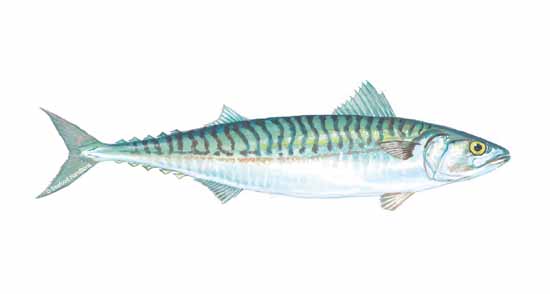 Mackerel is a handsome but underrated fish, probably because it doesn’t have the mild-whitefish profile American consumers are most comfortable with. The mackerel looks a lot like its cousin, the tuna, but smaller — usually 1 1/2 to 2 1/2 pounds. Shaped for swift swimming, the Atlantic mackerel moves quickly when danger threatens — up to 70 mph. Mackerel travel in large schools on both sides of the Atlantic Ocean. In the Northwest Atlantic, mackerel range from northern Carolina to southern Labrador. In the eastern Atlantic, they are found off Iceland and northern Norway. Europeans harvest them by freezer trawlers. The purse seine is the harvest method of choice for North American fishermen. Immature mackerel, called tinkers, are available in spring and weigh less than a pound. They are a traditional seasonal treat in New England and sell for a considerably lower price than mature fish, which reach their prime in the summer months.
Mackerel has a rich, pronounced flavor. The meat is soft, flaky and moist. The outer bands of dark, strong-tasting meat along the midline may be cut out for a milder flavor.The raw fish looks grayish and oily but firms up and becomes off-white to beige when cooked. The skin of fresh fish should have a nice sheen, and the eyes should be bright and concave. Small scales cover the entire body and give the skin a velvety texture. The mackerel’s distinctive coloring quickly begins to fade after the fish dies.
Mackerel is considered one of the more healthful fish because it’s rich in omega-3 fatty acids. Its oil content makes mackerel an excellent candidate for barbecuing or smoking. A lime marinade before cooking smoothes the taste and firms and whitens the meat. Europeans temper the pronounced flavor of mackerel by serving it with a sharp, acidic sauce such as gooseberry or unsweetened cranberry sauce.
Bluefish, Mahimahi, Large herring

Mattes Seafood has been working with Libertore’s in Perry Hall for years. The service provided by Michael Mattes and his company are always exceptional. We have never incurred any problems, we know we can always call even if it is last minute and we will be taken care of. We couldn’t ask for a more reliable vendor. All of their products are always delivered fresh and they are completely able to meet our needs! We are more than happy with the service provided and would love to continue to work wi… END_OF_DOCUMENT_TOKEN_TO_BE_REPLACED