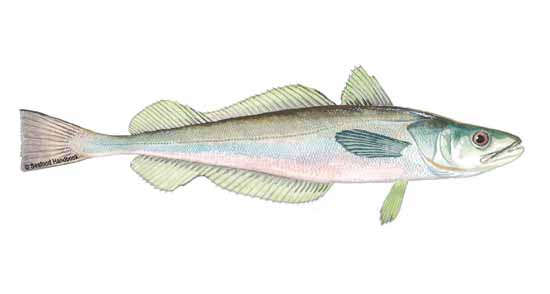 More than a dozen hake and whiting species inhabit temperate and cold waters of the Northern and Southern Hemispheres. Quality varies, depending upon species and handling. There are two separate families of hake, Merluccidae and Gadidae, but Merluccius is most common in the U.S. market, particularly Atlantic whiting (M. bilinearis), or silver hake from the Northwest Atlantic. Pacific whiting (M. productus), found from the Bering Sea to Baja California, has very soft flesh and is frozen almost immediately to retain its value. Most hakes are identified by geographic origin outside the United States, which imports large amounts of Argentine whiting (M. hubbsi) and Chilean hake (M. gayi). Two high-end hakes from Southwest Africa, M. capensis and M. paradoxus, are marketed as Cape capensis. M. australis, a big hake from southern Chile, is sold as Antarctic queen.
Hakes range in size from the 6-pound capensis to 1- to 2-pound Pacific whiting. Texture varies from soft to moderately firm among the species, though, overall, hakes have softer flesh and less flake than cod, haddock and pollock. The best species, like Cape capensis and Antarctic queen, have a texture similar to sole. Hake is mild-tasting, even a bit sweet.Raw flesh is lean and white to off-white (South American hake may be somewhat tan), with a coarse, watery appearance; cooked, it ranges from pure white to off-white. Capensis offers the firmest meat of the lot, followed by Atlantic and Argentine hake.
Hake can be substituted for many dishes calling for pollock or cod. The less expensive species, like Pacific whiting, Argentine hake and silver hake, are excellent fried in a light, crispy batter. Since it is bland-tasting, Pacific hake welcomes a broad range of seasonings. It is often used for fish sticks and cakes. Atlantic whiting, which is firmer in texture, is popular as corned hake in New England. The key with all hakes is to treat them gently in the kitchen.
Cod, Pollock, Flounder

Mattes Seafood has been working with Libertore’s in Perry Hall for years. The service provided by Michael Mattes and his company are always exceptional. We have never incurred any problems, we know we can always call even if it is last minute and we will be taken care of. We couldn’t ask for a more reliable vendor. All of their products are always delivered fresh and they are completely able to meet our needs! We are more than happy with the service provided and would love to continue to work wi… END_OF_DOCUMENT_TOKEN_TO_BE_REPLACED