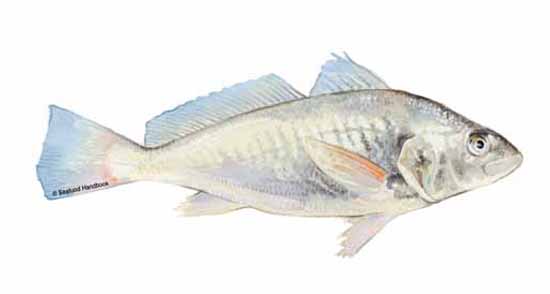 The Atlantic croaker is the smallest member of the Sciaenidae family of drums. The species gets its name from the croaking sound it makes from the voluntary contraction of muscles attached to the air bladder, which acts like a resonance chamber. It’s unclear whether the croaking is a form of communication within a school of fish, a means of depth sounding or a mating expression, but croakers tend to make the sound most often during breeding season. Though some 3- to 5-pound croakers are available, market size is 3/4 to 1 1/2 pounds. Atlantic croaker is found in the Atlantic and Gulf, from Cape Cod to Texas. The Chesapeake Bay region and Mississippi Delta are particularly productive areas. Croakers are caught with gillnets, pound nets and fish traps. In parts of the Gulf, Atlantic croaker is a bycatch of shrimp trawlers.
Raw croaker meat is usually snow white but may have a reddish tint. The cooked meat is white.Croaker is lean and full flavored, with an almost sweet taste. The flesh is firm, similar to that of black drum. The skin is edible.
A popular pan fish, croaker is often breaded or dusted with cornmeal or flour and pan-fried. It can also be marinated and grilled or sautéed, roasted and broiled. For a Southern favorite, dip a dressed, scaled croaker in water, milk, egg or a combination of the three, then roll in corn flour and cook in hot grease. The meaty fish also can be steamed whole.
Porgy, Mullet, Whiting

Mattes Seafood has been working with Libertore’s in Perry Hall for years. The service provided by Michael Mattes and his company are always exceptional. We have never incurred any problems, we know we can always call even if it is last minute and we will be taken care of. We couldn’t ask for a more reliable vendor. All of their products are always delivered fresh and they are completely able to meet our needs! We are more than happy with the service provided and would love to continue to work wi… END_OF_DOCUMENT_TOKEN_TO_BE_REPLACED