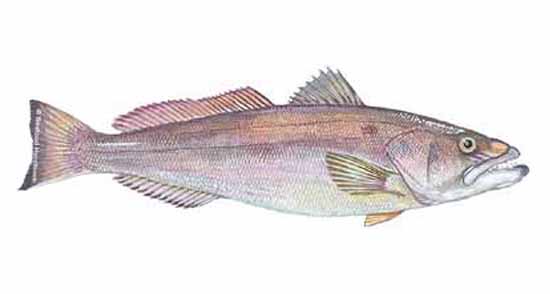 Chilean sea bass are not really bass but Patagonian toothfish, a large, slow-growing species first harvested in the early 1980s by Chilean longliners working the continental shelf in depths of 5,000 to 6,000 feet. Chilean sea bass is a member of the Nototheniidae family. In Chile, the fish is also called mero, merluza negra and bacalao de profundidad (“cod of the deep”). The fish was first harvested off the southern coast of Chile, almost to the Antarctic. The grounds have been extended to much of the Southern Hemisphere. It’s a big fish; headed-and-gutted Chilean sea bass have weighed in at 100 pounds, but aver-age market weight is closer to 20 pounds. The fish is marketed in frozen form; “fresh” sea bass is nearly always “refreshed” product (frozen fish that has been thawed). However, since Chilean sea bass is generally frozen at sea, it’s a superior product even when sold as “previously frozen.” Sea bass from South America tend to be bigger than their South African counterparts.
Chilean sea bass has a rich, melt-in-your-mouth flavor. The moderately oily meat is tender and moist with large, thick flakes. Meat from raw Chilean sea bass is snow white. When cooked, the meat remains white, comparable in appearance to cod.Refreshed fillets should be shiny and resilient. Frozen product shouldn’t have freezer burn or discoloration.
Chilean sea bass is an excellent fish for grilling, but the skinless fillets must be handled carefully so they don’t fall apart while cooking. You can also poach or sauté the meat, but avoid heavy sauces that compete with the fish’s own full flavor. Because of its high oil content, Chilean sea bass also lends itself to smoking. The same characteristic makes it unsuitable for frying.
Sablefish, Black sea bass

Mattes Seafood has been working with Libertore’s in Perry Hall for years. The service provided by Michael Mattes and his company are always exceptional. We have never incurred any problems, we know we can always call even if it is last minute and we will be taken care of. We couldn’t ask for a more reliable vendor. All of their products are always delivered fresh and they are completely able to meet our needs! We are more than happy with the service provided and would love to continue to work wi… END_OF_DOCUMENT_TOKEN_TO_BE_REPLACED