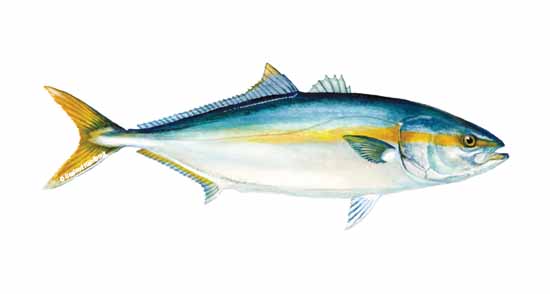 Yellowtail is a confusing name, as it can apply to flounder, tuna and sole. It’s also the common name for several species of amberjack, sleek migratory tuna-like fish found off both U.S. coasts. The most valuable member of this family is the yellowtail farmed in Japan and featured in U.S. sushi bars under the name hamachi. The fish is prized for eating raw and commands a premium price in Japanese markets. Raised in cages in Japan’s Inland Sea, hamachi are harvested at around 15 to 20 pounds. Upon harvesting, the fish are iced and handled with great care to prevent bruising of the flesh, which lowers its value as sashimi. A small amount of hamachi is harvested wild off the coast of central Japan. Another yellowtail species (Seriola lalandei) is harvested wild off southern California and Baja, California and farmed in Mexico and Australia. While amberjacks are subject to parasite infestation in the wild, this is not a problem with farmed hamachi.
Yellowtail meat is pink, though wild yellowtail can vary in color due to differing fat content among fish. Farmed yellowtail is consistently light colored because it is high in fat. Yellowtail fillets can have a dark muscle line along the edge.Cooked meat is white and firm with a sweet, mild flavor. The high oil content gives the flesh a buttery texture.
Hamachi is a versatile fish. Though mostly served raw, thinly sliced for sashimi, it is delicious lightly seared or marinated and then roasted, grilled or braised. It can also be simply seasoned with salt for grilling; salt and high heat bring out the sweet, delicate flavor.
Albacore tuna, Swordfish

Mattes Seafood has been working with Libertore’s in Perry Hall for years. The service provided by Michael Mattes and his company are always exceptional. We have never incurred any problems, we know we can always call even if it is last minute and we will be taken care of. We couldn’t ask for a more reliable vendor. All of their products are always delivered fresh and they are completely able to meet our needs! We are more than happy with the service provided and would love to continue to work wi… END_OF_DOCUMENT_TOKEN_TO_BE_REPLACED