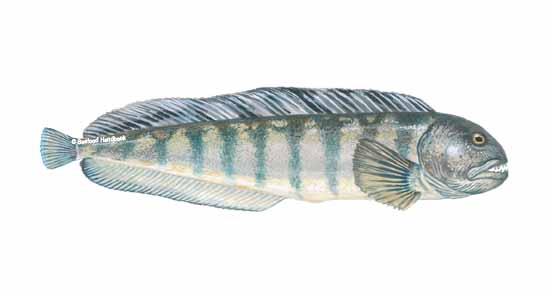 The ferocious-looking wolffish gets its name from the sharp, protruding teeth it uses to feast on lobsters, clams and other shellfish. Found from southern New England to Greenland and the Barents Sea, the bottom-dwelling coldwater creature is primarily a bycatch of trawl fisheries targeting cod, haddock and other groundfish. Iceland, which has a directed fishery for the species, is the largest producer. Imports also come from Canada and Norway, which is developing wolffish-farming  operations. The striped wolffish is one of three Atlantic species, which also include the northern (A. denticulatus) and the spotted (A. minor) wolffish. From a culinary standpoint, there’s little difference among the three. Wolffish can reach 30 or 40 pounds, but market size averages 10 pounds.
Wolffish has long been held in high regard by European chefs, who find it an acceptable alternative to Dover sole. The lean, pearly white flesh of the wolffish has a firm texture and a mild, sweet flavor, sometimes likened to lobster. The meat has a flake similar to cod’s but not as large.Wolffish skin is edible, but since there are no scales, this species cannot be kosher.
Not as firm as monkfish nor as delicate as sole, the versatile wolffish holds together well and can be cooked successfully by many methods. It’s excellent sautéed and sauced, or encrusted in herbed mustard and baked. The fish is a good addition to bouillabaisse, and with the skin on (to prevent sticking) it is even grill-friendly.
Cod, Turbot, Haddock

Mattes Seafood has been working with Libertore’s in Perry Hall for years. The service provided by Michael Mattes and his company are always exceptional. We have never incurred any problems, we know we can always call even if it is last minute and we will be taken care of. We couldn’t ask for a more reliable vendor. All of their products are always delivered fresh and they are completely able to meet our needs! We are more than happy with the service provided and would love to continue to work wi… END_OF_DOCUMENT_TOKEN_TO_BE_REPLACED