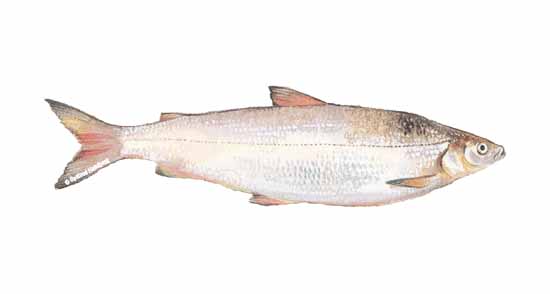 The name “whitefish” can be confusing, because it is often used as a generic marketing term for many saltwater species of mild-flavored, white-fleshed fish. Further, it describes at least seven distinct species of related fish, all found in Arctic and sub-Arctic fresh and salt water. The most valuable of these is lake whitefish, Coregonus clupeaformis, which inhabits cold, deep-water lakes in the northern United States and in Canada, which is the primary producer. These silvery, small-mouthed, freshwater fish are in the family Salmonidae. Though related to salmon and trout, they have pure-white meat and are traditionally the species used for gefilte fish. Whitefish roe, marketed as golden caviar, is highly valued. Because whitefish are harvested from cold, northern waters and are not subjected to climatic heat, the quality is generally quite good.
Whitefish is considered one of the best-eating freshwater fish there is. Because the fish lives in icy northern lakes, the meat has a high fat content, making it an excellent candidate for smoking. The mild flavor is more like salmon than trout. The meat is medium-firm with a large flake.Though whitefish is a salmonid, the meat looks nothing like trout or salmon. Raw, the flesh is almost pure white, and it cooks up off-white.
Due to a fairly high fat content, whitefish are a little more forgiving about overcooking than leaner fish. For grilling, use skin-on fillets. Whitefish can also be used in seafood chowders or salads, since the meat is solid and holds together well.
Rainbow trout, Salmon

Mattes Seafood has been working with Libertore’s in Perry Hall for years. The service provided by Michael Mattes and his company are always exceptional. We have never incurred any problems, we know we can always call even if it is last minute and we will be taken care of. We couldn’t ask for a more reliable vendor. All of their products are always delivered fresh and they are completely able to meet our needs! We are more than happy with the service provided and would love to continue to work wi… END_OF_DOCUMENT_TOKEN_TO_BE_REPLACED