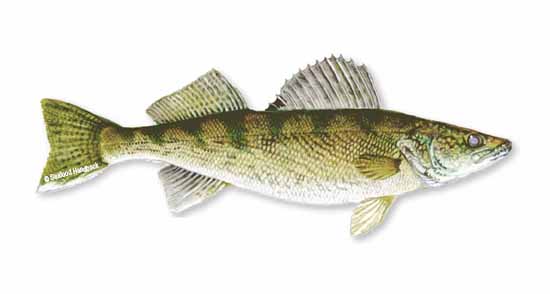 Walleye is widely regarded as the best-tasting freshwater fish. The largest member of the perch family, it is native to lakes and streams throughout Canada and the north-central United States. However, Canada is the only commercial source of walleye, as commercial fishing and sales are banned in the United States to protect recreational fisheries. Named for its highly reflective, cat-like eyes, the walleye can reach a length of 30 inches and weight of 15 pounds, though typical market size is 1 to 5 pounds. Wildly popular with sport fishermen and increasingly popular on restaurant menus, walleye has come into increased demand, fueling research into its potential for aquaculture. To date, the species has proven difficult to farm, with mortality rates and production costs prohibitively high, so farming serves only to stock lakes for anglers. Most restaurant and retail supplies of walleye come from Lake Erie, Lake Winnipeg, Lake of the Woods and other large Canadian lakes. Although fresh and frozen walleye is available year-round, peak fresh supplies are in fall and winter.
Fine-flaked walleye fillets are prized for their thickness and succulent, sweet, mild flavor. The fish has few bones, which adds to its popularity.The raw meat is a rich pink color but clear white when cooked. When checking for freshness of whole walleye, observe the flesh and skin, since you won’t see clear, bright eyes even in the freshest walleye. The eyes are naturally flat and opaque.
Impressively versatile, walleye can be baked, grilled, poached, stuffed, sautéed, deep-fried and used in chowder. Batter frying locks in the juiciness and is a popular treatment among walleye fans. Simple preparations are the best way to showcase the succulent, delicate flavor. For grilling, simply brush a fillet with lemon butter. If you must embellish the fish, use a light touch with sauces, such as white wine, garlic or dill.
Yellow perch, Grouper, Snapper

Mattes Seafood has been working with Libertore’s in Perry Hall for years. The service provided by Michael Mattes and his company are always exceptional. We have never incurred any problems, we know we can always call even if it is last minute and we will be taken care of. We couldn’t ask for a more reliable vendor. All of their products are always delivered fresh and they are completely able to meet our needs! We are more than happy with the service provided and would love to continue to work wi… END_OF_DOCUMENT_TOKEN_TO_BE_REPLACED