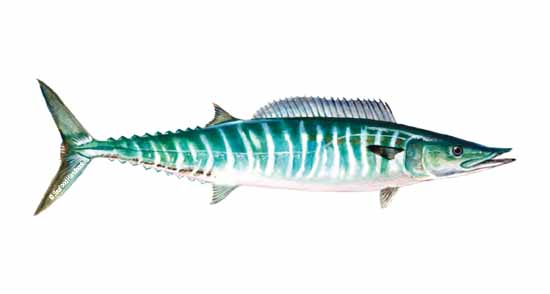 Wahoo, a member of the Scombridae family of mackerels and tunas, is closely related to the king mackerel. Hawaiian lore has it that the name wahoo comes from European explorers’ misspelling of “Oahu” on early maps, since the fish was abundant around that island. The fish’s alternate name, ono, is derived from the Hawaiian word òno, meaning “good to eat.” Wahoo are found in tropical and subtropical waters of the Atlantic, Pacific and Indian oceans, but the bulk of the global harvest is from the Caribbean and South Pacific. Most domestic supplies are from Hawaii. About 50 percent of Hawaii’s commercial wahoo harvest is taken by trollers. The remainder is caught on longline gear. Some wahoo is also landed in Florida as tuna and swordfish bycatch. Wahoo may grow to more than 100 pounds round weight, but the usual size of fish caught off Hawaii is 8 to 30 pounds.
Raw wahoo meat is lighter in color than that of its mackerel cousins and has less of the red muscle meat. The pale-pink flesh cooks up white.Wahoo is mild-tasting, with a firm, lean texture and large, circular flake. Grilled wahoo has been compared to chicken or veal in flavor.
Although a versatile fish, wahoo benefits from cooking methods suitable for species with low fat content so the meat doesn’t dry out when cooking. It cooks and tastes like an ultra-light, lean tuna. The firm flesh is good grilled or broiled, especially if marinated first to tenderize it and enhance the mild flavor.
Swordfish, Tuna

Mattes Seafood has been working with Libertore’s in Perry Hall for years. The service provided by Michael Mattes and his company are always exceptional. We have never incurred any problems, we know we can always call even if it is last minute and we will be taken care of. We couldn’t ask for a more reliable vendor. All of their products are always delivered fresh and they are completely able to meet our needs! We are more than happy with the service provided and would love to continue to work wi… END_OF_DOCUMENT_TOKEN_TO_BE_REPLACED