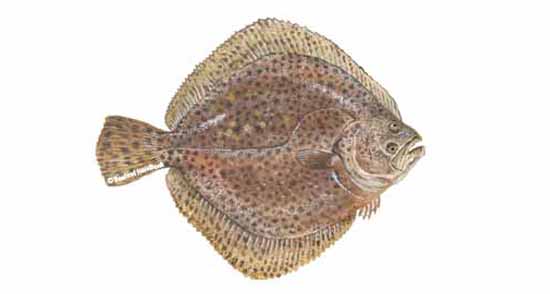 Found on menus in the whitest of white-tablecloth restaurants, turbot (pronounced tur-bet) is a favored flatfish for discerning chefs. A member of the Bothidae, or left-eyed, family of flounders, turbot (previously known as Psetta maxima) is found in shallow inshore waters throughout the Mediterranean and north to the Norwegian Sea. Primary producers are the Netherlands, Denmark and the United Kingdom. Global supplies are limited, which accounts for the high price this fish commands. Farmed production in France, Spain and Chile is supplementing wild harvests. Farm-raised turbot are generally smaller (1 to 4 pounds) and milder in flavor than wild turbot, which can reach 30 pounds but average 10 pounds. Several lesser-quality species of flatfish are sometimes passed off as European turbot, including Greenland turbot and some West Coast flounders. Inferior in flavor and with softer flesh, these flatfish can’t compare to the real turbot.
Turbot has gleaming flesh that retains its bright-white appearance when cooked. The firm meat has a large flake and an excellent mild flavor.Like all flatfish, a turbot yields four fillets, with meatier back fillets than belly portions. Fillets from a 3- to 4-pound turbot are quite meaty; those from smaller fish can be rather thin. A rim of fatty tissue on the fin side of each fillet contains a row of “kernels” of snow-white meat.
Treat turbot with the respect it deserves, using preparations that highlight the delicate flavor and bright-white flesh. Turbot is good baked whole; the bones add flavor. Fillets can be overcooked in dry heat; steaming, poaching and pan-frying are preferable to grilling.
Pompano, Dover sole

Mattes Seafood has been working with Libertore’s in Perry Hall for years. The service provided by Michael Mattes and his company are always exceptional. We have never incurred any problems, we know we can always call even if it is last minute and we will be taken care of. We couldn’t ask for a more reliable vendor. All of their products are always delivered fresh and they are completely able to meet our needs! We are more than happy with the service provided and would love to continue to work wi… END_OF_DOCUMENT_TOKEN_TO_BE_REPLACED