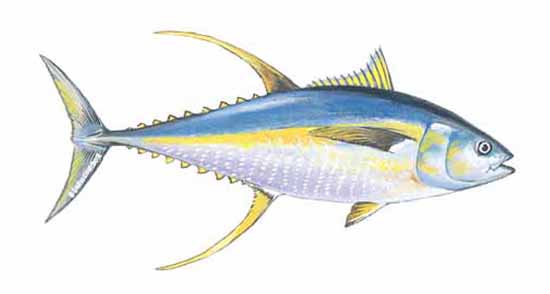 Yellowfin, as its name implies, is distinguished from other tunas by a long, bright-yellow dorsal fin and a yellow strip down its side. It’s also more slender than bluefin. With its flashy markings, the yellowfin tuna is especially impressive at night. Fishermen say that when watching yellowfin feed, it’s easy to see why they carry the Hawaiian name ahi, or fire. Yellowfin is the most tropical species of tuna, abundant in warm waters throughout the Pacific and Atlantic, often mixed with other species, especially skipjack tuna. The fish is most often harvested by purse seine, but the best-quality yellowfin is caught by hook and line. Market size runs from 7 1/2 to 20 pounds. High-quality fresh yellowfin comes from Hawaii, Florida, Mexico, southern California and the Gulf of California. Tuna is often canned in countries other than those harvesting it. Top canning countries exporting tuna to the United States include Thailand, the Philippines and Indonesia.
Yellowfin tuna has a mild, meaty flavor — similar, some say, to swordfish. It’s more flavorful than albacore, but leaner than bluefin. The meat is bright red in its raw state but, when cooked, turns brown to grayish-tan, firm and moist, with large flakes. Yellowfin is also served raw as sashimi and in sushi. Canned product (light-meat tuna) is a bit darker than canned albacore and is often blended with skipjack tuna.Look for tuna meat with a glistening, wet look. The ideal is bright translucent red. Fat is desirable, as more fat means more flavor.
Yellowfin is excellent raw, but for grilling and broiling, cut steaks 1 1/2 inches thick. The tuna needs little flavor enhancement; just brush with olive oil and sprinkle with seasoning. For a milder taste, remove the dark lateral line from the meat. Tuna can also marinate for several hours without becoming “cooked.” Try a marinade of white wine, a little oil and some brown sugar for an hour or two before grilling.
Swordfish, Mako shark, Other tunas

Mattes Seafood has been working with Libertore’s in Perry Hall for years. The service provided by Michael Mattes and his company are always exceptional. We have never incurred any problems, we know we can always call even if it is last minute and we will be taken care of. We couldn’t ask for a more reliable vendor. All of their products are always delivered fresh and they are completely able to meet our needs! We are more than happy with the service provided and would love to continue to work wi… END_OF_DOCUMENT_TOKEN_TO_BE_REPLACED