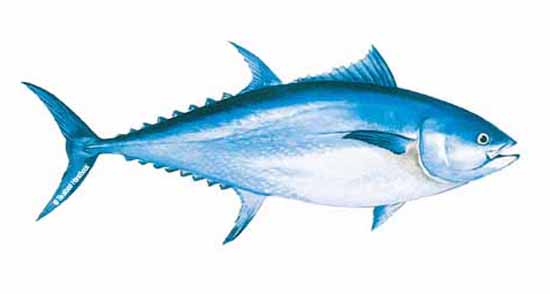 Fishermen call them giants for a good reason: The bluefin tuna is the largest of the commercially harvested tuna species, with a record weight of just over 2,000 pounds and a length of over 12 feet. This fast-swimming migratory species occupies temperate and tropical waters worldwide. Over half the global catch comes from biologically separate stocks in the eastern and western Atlantic Ocean. The Mediterranean is also a historic area for bluefin. Bluefin is caught by a variety of gear types, including purse seine, harpoon, longline, troll, handline and rod and reel. The giant bluefin has a blue-black upper body and silvery white coloring on the sides and belly. The finlets are edged in black. Despite its potential large size, commercially caught bluefins are usually between 200 and 400 pounds. Bluefin is graded by taking “plugs” of flesh to test for fat content and color, critical factors in the price structure.
Because of its high fat content, bluefin is especially prized as a raw product and is marketed in three grades. No. 1 “sashimi-grade,” the freshest and fattiest, goes to the Japanese market. No. 2, next best, is “grill grade.” Nos. 3 and 4 reflect diminished quality.Bluefin is the darkest and fattiest of any tuna, and its uncooked meat is red. When cooked, the meat turns firm and an off-white or ivory color. The flavor is distinctive. The flesh has the firmness and appearance of beef steaks. Raw bluefin meat can be brined overnight to mellow the flavor.
Overcooked tuna is tough and tasteless. When broiling or grilling the meaty bluefin, treat it as you would sirloin steak; it’s best if done on the rare side. The color will be nice and light, the meat firm and the flavor intense. Serve a nice red wine with bluefin steaks.
Swordfish, Other tunas, Mako shark

Mattes Seafood has been working with Libertore’s in Perry Hall for years. The service provided by Michael Mattes and his company are always exceptional. We have never incurred any problems, we know we can always call even if it is last minute and we will be taken care of. We couldn’t ask for a more reliable vendor. All of their products are always delivered fresh and they are completely able to meet our needs! We are more than happy with the service provided and would love to continue to work wi… END_OF_DOCUMENT_TOKEN_TO_BE_REPLACED