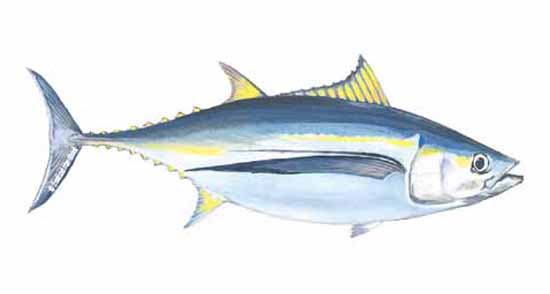 Albacore is best known as America’s highest-grade, “white meat” canned tuna. In fact, it’s the only tuna meat allowed to be labeled “white meat.” However, it has also developed a reputation out of the can in fresh and frozen markets. The albacore has a streamlined, torpedo-shaped body. It sports the blue and silver coloration of the other tunas but has longer pectoral fins. A schooling fish, albacore is caught in tropical and subtropical waters worldwide by trollers and longliners. In the Atlantic, albacore migrate as far north as the Bay of Biscay. Along the North American side of the Atlantic, they are sparse. In the Pacific fisheries, they exist off the West Coast and in the waters around Hawaii. The fish can range in size from 5 to 100 pounds, although the average market weight is between 10 and 30 pounds. High-grade “clipper” albacore loins, from which steaks can easily be taken, have been cut from freshly landed tuna and frozen onboard. Yield and quality are excellent. Tuna must be kept well chilled from the moment of harvest to prevent development of histamine, which can result in scromboid poisoning.
Albacore has a mild, rich taste and a firm, steaky texture, with large, moist flakes. Albacore meat is less dense than bluefin tuna, though it is one of the fattiest species, with more omega-3 than the rest of the tunas.Albacore has the lightest-colored meat of all the tunas, though it can range from light beige to almost brown when raw. All albacore flesh becomes off-white after cooking.Albacore meat is not as firm as yellowfin or bluefin, which makes it less suited for sashimi.
Albacore, like the other tunas, should appeal to meat lovers, especially those who like to grill. Albacore cooks quickly, and for maximum flavor is best served rare. Try searing albacore steaks to serve with a highly seasoned sauce. Marinating before cooking and basting during will keep albacore moist and prevent it from turning tough.
Other tunas, Mako shark, Swordfish

Mattes Seafood has been working with Libertore’s in Perry Hall for years. The service provided by Michael Mattes and his company are always exceptional. We have never incurred any problems, we know we can always call even if it is last minute and we will be taken care of. We couldn’t ask for a more reliable vendor. All of their products are always delivered fresh and they are completely able to meet our needs! We are more than happy with the service provided and would love to continue to work wi… END_OF_DOCUMENT_TOKEN_TO_BE_REPLACED