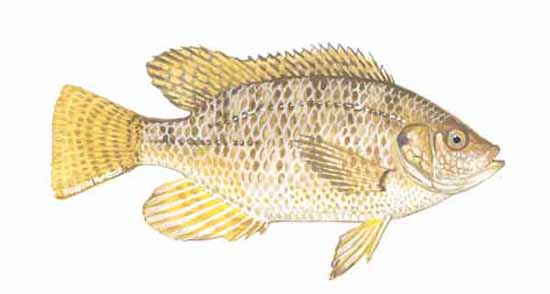 Tracing its origin to the Nile River, tilapia has been farm raised for decades and is cultivated in warm waters the world over. It is the second-most cultured group of fish in the world, exceeded only by carp. Domestically, tilapia are cultured in the southern and western states. Costa Rica and Colombia are major suppliers of fresh product. Three of the most common species cultivated in the United States are Tilapia nilotica, an emerald-green tilapia known for its high yield and rapid growth; T. aureus, a cold-resistant strain; and T. mossambica, noted for its reddish skin color, which makes it popular for the live market and display tanks. Legend has it that tilapia was the fish Jesus of Nazareth multiplied a thousandfold to feed the masses. This gave the species its frequently used name of “St. Peter’s fish,” a name the FDA does not allow to be marketed. Whole tilapia normally range from 1 to 2 pounds. Some buyers prefer fish larger than 2 pounds.
The mild, sweet tasting, lean-meated tilapia has a slightly firm, flaky texture. Many compare the mild taste of tilapia to that of another farm-raised success story, catfish. Raw meat is white to pinkish-white and may have a thin layer of darker muscle tissue just below the skin side of fillets. The cooked meat is white and lean with tender flakes.Water quality and feed are critical to the raising of premium tilapia. Poor quality results in an off-flavor or a muddy, grassy taste similar to that of wild-run catfish.
Tilapia is highly versatile, but whatever cooking method you choose, stick with a subtle sauce to help avoid overpowering tilapia’s delicate flavor. The tilapia’s attractive skin — gold, red or black and white — should be featured but not necessarily eaten, as it can have a bitter taste.
Catfish, Flounder, Orange roughy

Mattes Seafood has been working with Libertore’s in Perry Hall for years. The service provided by Michael Mattes and his company are always exceptional. We have never incurred any problems, we know we can always call even if it is last minute and we will be taken care of. We couldn’t ask for a more reliable vendor. All of their products are always delivered fresh and they are completely able to meet our needs! We are more than happy with the service provided and would love to continue to work wi… END_OF_DOCUMENT_TOKEN_TO_BE_REPLACED