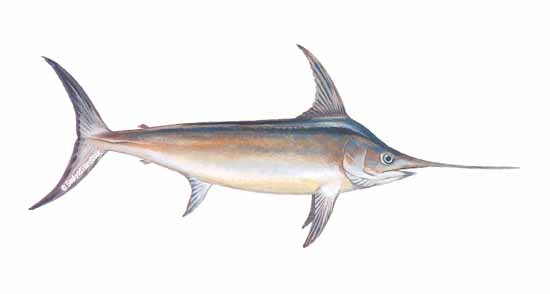 There is only one species of swordfish, Xiphias gladius. This nonschooling fish roams temperate and tropical seas worldwide and is hunted by more than 30 nations. Swordfish  harvesting is governed by the International Commission for the Conservation of Atlantic Tunas. U.S. Atlantic fishermen operate under a strictly enforced ICCAT quota, but not all ICCAT nations observe their quotas. Swordfish grow to over 1,000 pounds but average 50 to 200 pounds. Most are caught by longline, the rest by gillnet and a very small amount by harpoon. The fishery is conducted at night (except the harpoon fishery). The best catches from the longline fleet come on the full moon, when nights are bright and swordfish are feeding heavily. Thus, the best catches occur during the final quarter of the moon. The opposite is true for gillnet fisheries. The darker the night, the better the fishing (because sword-fish can’t see the net). Generally speaking, longlined fish are considered the best. Frozen-at-sea swordfish, known as “clipper,” is often a high-quality product and less expensive than fresh sword, which can be less fresh than FAS.
Swordfish is moist and flavorful with a slightly sweet taste. Steaks have a moderately high oil content and a firm, meaty texture. The flesh color can vary from white and ivory to pink and orange. Color variation does not indicate quality, and all swordfish turns beige after cooking.Swordfish steaks have a whorling pattern and shouldn’t be confused with the mako shark’s more circular meat pattern.  Swordfish also has a smooth skin; mako’s is rough.
Any recipe that works for tuna will work for swordfish. While traditionally swordfish is served baked with a slice of lemon, more chefs are preparing it in ways that stretch it, like swordfish kebabs with dipping sauces. Swordfish is excellent for marinating and grilling. It can also be easily cooked from a frozen state. For moist grilled swordfish, select steaks that are at least 1 1/4 inches thick. Baste with olive oil and lemon juice before and during cooking.
Halibut, Mako shark, Yellowfin tuna

Mattes Seafood has been working with Libertore’s in Perry Hall for years. The service provided by Michael Mattes and his company are always exceptional. We have never incurred any problems, we know we can always call even if it is last minute and we will be taken care of. We couldn’t ask for a more reliable vendor. All of their products are always delivered fresh and they are completely able to meet our needs! We are more than happy with the service provided and would love to continue to work wi… END_OF_DOCUMENT_TOKEN_TO_BE_REPLACED