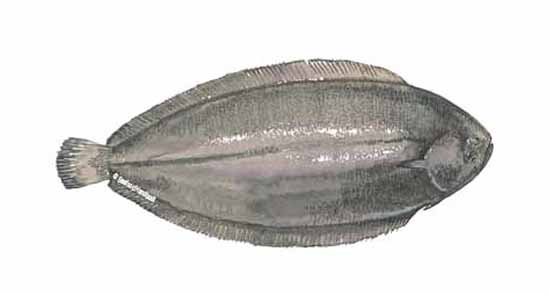 There are no true soles along America’s eastern shore, though there are several species in European waters. The best of them is the Dover sole, a mainstay of the European seafood scene for generations and considered one of the foundations of Continental cuisine. This thick-bodied flatfish never gets much longer than 20 inches and, like other soles, has its eyes on the right-hand side. Don’t confuse the European Dover sole with America’s West Coast “Dover” sole (Microstomus pacificus). They are not the same fish. The geographical title “Dover” was tacked on to the true sole because the English town of Dover could supply more fish for London’s Billingsgate market than any other fishing village. But, despite its name, Dover sole is caught in other places. This flatfish ranges from the Mediterranean to the North Sea and is usually found in shallow waters. The best grounds are said to be the North Sea and the Bay of Biscay. Dover sole is landed by trawlers.
Few fish command more respect in culinary circles than the true Dover sole, which yields thin yet firm fillets that hold together well in many preparations. The raw meat is glistening white and dense and cooks up white. The flavor of the Dover sole is mild and sweet.One fan of Dover sole describes the fish as being “more like a meat. It doesn’t have the texture of a normal fish.” Despite its delicate flavor, it’s able to stand up to the heavy sauces favored by European chefs.
Like all flatfish, Dover sole yields a thin fillet, which makes it prone to over-cooking. As a result, it’s better suited to poaching, steaming or saucing than to dry-heat methods like baking or broiling. When sautéing, slip a slice of raw potato under the thin part of the tail to allow for more even cooking. Dover sole is considered excellent cooked on the bone. In fact, in England, the fish is often served whole and filleted at the table.
Flounder, Other soles

Mattes Seafood has been working with Libertore’s in Perry Hall for years. The service provided by Michael Mattes and his company are always exceptional. We have never incurred any problems, we know we can always call even if it is last minute and we will be taken care of. We couldn’t ask for a more reliable vendor. All of their products are always delivered fresh and they are completely able to meet our needs! We are more than happy with the service provided and would love to continue to work wi… END_OF_DOCUMENT_TOKEN_TO_BE_REPLACED