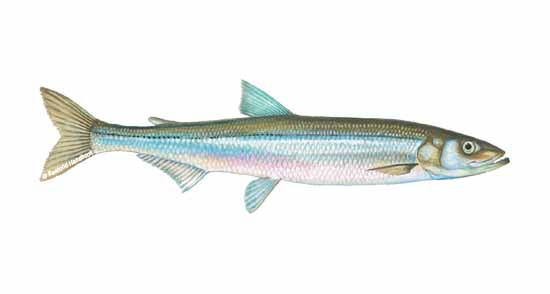 Of the nine smelt species that inhabit North American waters, the most common is the ubiquitous rainbow smelt, found in the western Atlantic and Pacific oceans and in the Arctic Sea. It is mainly an inshore, anadromous fish that spends most of its life in saltwater but migrates to freshwater lakes and streams in the spring to spawn. However, smelt is a highly adaptable species, and landlocked populations have established themselves from Maine to the Great Lakes and southeastern Canada. Primary commercial fisheries for smelts are in the Great Lakes, off the coast of Canada around New Brunswick and on the Maine coast. Though catches are greatest in the spring, smelts are also targeted by ice fishermen. The silvery little fish reportedly take their name from the Anglo-Saxon word “smoelt,” meaning shiny. They are relished for their wonderful, fresh odor, reminiscent of freshly mowed grass or sliced cucumber, which has earned them the nickname “cucumberfish.”
Market-sized rainbow smelts are generally around 6 inches long, with olive-green skin that has a silvery sheen. Smelts have soft bones; small, cooked, H&G smelts can be eaten bones and all. With larger smelts, the cooked meat flakes readily off the bones. The delicate skin is also eaten.Smelts have lean, white flesh that becomes white, soft and fine-flaked when cooked. It has a fresh, sweet flavor.
Larger smelts can be butterflied or filleted for broiling or grilling or left whole and baked. But 6-inch smelts are most common and are cooked and eaten whole (with or without head and viscera). Traditional preparations call for dipping smelts in batter and deep-frying or dredging them in flour or bread crumbs and then pan-frying.
Herring, Lake whitefish

Mattes Seafood has been working with Libertore’s in Perry Hall for years. The service provided by Michael Mattes and his company are always exceptional. We have never incurred any problems, we know we can always call even if it is last minute and we will be taken care of. We couldn’t ask for a more reliable vendor. All of their products are always delivered fresh and they are completely able to meet our needs! We are more than happy with the service provided and would love to continue to work wi… END_OF_DOCUMENT_TOKEN_TO_BE_REPLACED