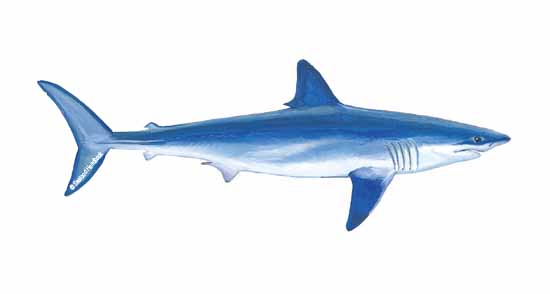 Feeding on some of the world’s fastest tunas and billfish, the mako shark is at the very apex of the marine food chain. It’s also among the best-tasting of the hundreds of shark species around the world. There are two mako species: Isurus oxyrinchus, or shortfin mako, and I. paucus, or longfin mako. Oxyrinchus is the more common of the two and is the commercially significant species. Mako shark is an excellent alternative to swordfish and sometimes mislabeled as such. To distinguish mako from swordfish, check the skin; mako feels like sandpaper, while swordfish is smooth. Makos are harvested from subtropical or temperate waters worldwide. U.S. fisheries exist off southern California, in the Gulf of Mexico off Florida and following the Gulf Stream north to New England. Makos are usually taken as a bycatch of longliners. The shark’s maximum weight is 1,500 pounds, but 125 pounds is the average market size.
Mako shark is moist and slightly sweet, with a full-bodied, meaty taste. Both flavor and texture are similar to swordfish, but the flesh of the mako is moister, and the meat is not as sweet. Fresh, raw mako is very soft and ivory-pink or a muddy, reddish color that turns ivory white and firm when cooked. While the lean, dense meat looks very similar to swordfish, it lacks the whorls of the swordfish steak.Like all sharks, makos carry urea in their bloodstreams. They must be bled immediately and iced to prevent the urea in the tissues from turning to ammonia. If you smell ammonia, don’t accept the fish.
Mako can be marinated, blackened, cubed for use in soups and stews, or chunked for kebabs. Wrapping or covering the meat during cooking keeps the moisture in. Trim red meat away before cooking, since bloodlines can impart a bitter taste.
Swordfish, Tuna, Other sharks

Mattes Seafood has been working with Libertore’s in Perry Hall for years. The service provided by Michael Mattes and his company are always exceptional. We have never incurred any problems, we know we can always call even if it is last minute and we will be taken care of. We couldn’t ask for a more reliable vendor. All of their products are always delivered fresh and they are completely able to meet our needs! We are more than happy with the service provided and would love to continue to work wi… END_OF_DOCUMENT_TOKEN_TO_BE_REPLACED