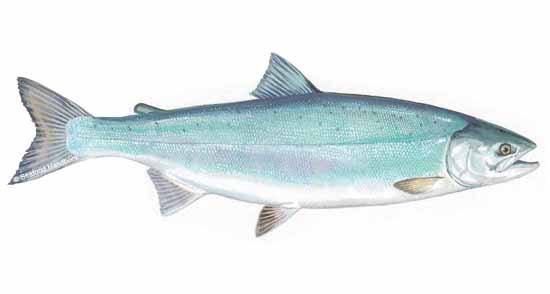 Sockeye salmon is the most valuable U.S. salmon species and the premium canned salmon, known as red salmon to canners. Sockeye are also known as kokanees (a landlocked species) and quinaults. The name sockeye has nothing to do with the fish’s eyes but is a corruption of the Native American name sukkai. Sockeye range from California’s Sacramento River system north to the Bering Sea and then south to northern Hokkaido. Bristol Bay, Alaska, has the largest sockeye run, during which millions of fish are taken. Wild-run Bristol Bay sockeye are of such quality that they often compete with Chilean farm-raised coho on the world market. There are also major runs in the Copper River and parts of Southeast Alaska. Commercially caught fish run 4 to 10 pounds. Most are caught with gillnets. You’ll pay a premium for seine-caught fish, but they’re very good, as are the small portion of troll-caught sockeye salmon. Sockeye are not farmed.
For its long migration, the sockeye carries a large amount of fat, making it rich in omega-3s. This gives the meat a nice, rich flavor. Some people feel the flavor rivals or is even better than that of chinook.The raw meat is firm and has a bright-red or orange-red color. Sockeyes are the reddest-fleshed of the wild salmon. Cooked meat remains red and firm. Skin and flesh color make sockeye attractive as a display item and in buffets.
A light marinade and simple grilling treatment showcase the wonderful flavor of sockeye. Use salmon steaks 1 to 2 inches thick. Prepare a mari-nade by mixing 1 cup white wine with 1/4 teaspoon dried marjoram, 1 teaspoon minced onion and freshly ground black pepper. Marinate in the refrigerator for a couple of hours, turning the salmon once or twice. Grill until fish flakes readily and is no longer translucent.
Chinook salmon, Coho salmon, Rainbow trout

Mattes Seafood has been working with Libertore’s in Perry Hall for years. The service provided by Michael Mattes and his company are always exceptional. We have never incurred any problems, we know we can always call even if it is last minute and we will be taken care of. We couldn’t ask for a more reliable vendor. All of their products are always delivered fresh and they are completely able to meet our needs! We are more than happy with the service provided and would love to continue to work wi… END_OF_DOCUMENT_TOKEN_TO_BE_REPLACED