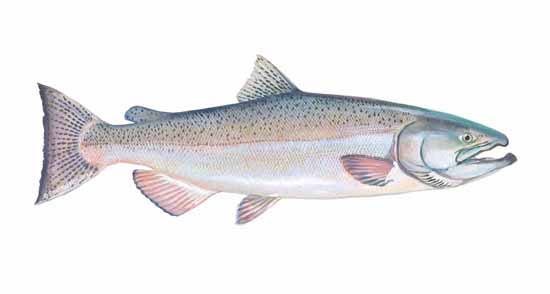 Chinooks are the largest and top-of-the-line among the Pacific salmon species. Unlike other Pacific salmon, which spend anywhere from one to three years at sea, kings can stay out as long as five years before returning to their natal streams. They are harvested from central California to the Yukon River in Alaska and in Canada, primarily by trollers but also by seiners and gillnetters. Some chinooks are well over 50 pounds but the bulk of the commercial catch is between 11 and 18 pounds. Chinook salmon are often known and marketed by the name of the river system from which they come. The Copper River produces excellent kings. Other Alaska river systems are the Kuskokwim and the Yukon. The return of Copper River salmon in late May or early June heralds the beginning of Alaska’s wild salmon season. Chinook salmon is also farmed in British Columbia, Washington, New Zealand and Chile.
Chinooks need a large fat reserve for their long-distance migration. That translates into a pronounced, buttery, rich taste. The oily chinook flesh is softer than that of other wild salmon species. Except for some white-meat strains of chinook, the flesh is almost always red, never pink.White king is a strain with pale meat, not to be confused with “pale kings,” which are sexually mature fish. Though light in color, the white king’s flavor is as rich as the more deeply colored chinook’s.
Simple treatments are perfect for the rich and flavorful king salmon, but the fish can also stand up to hearty flavorings. For a simple preparation that packs a flavor wallop, try broiling or grilling a piece of king salmon with pesto sauce. Start cooking with the top side left plain. After turning, give the cooked top surface a generous application of basil pesto.
Other salmon, Rainbow trout

Mattes Seafood has been working with Libertore’s in Perry Hall for years. The service provided by Michael Mattes and his company are always exceptional. We have never incurred any problems, we know we can always call even if it is last minute and we will be taken care of. We couldn’t ask for a more reliable vendor. All of their products are always delivered fresh and they are completely able to meet our needs! We are more than happy with the service provided and would love to continue to work wi… END_OF_DOCUMENT_TOKEN_TO_BE_REPLACED