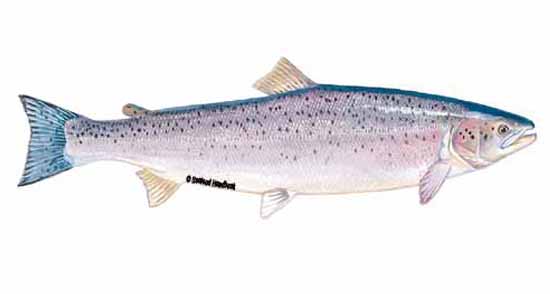 One of the great success stories of modern aquaculture, Atlantic salmon farming first emerged on a commercial scale in the early 1980s, with Norway leading the way. Since that time, global production has increased tremendously, and Atlantic salmon are farmed in more than a dozen countries around the world — most notably, Latin America, Europe and North America. Atlantic salmon lack the many common and regional names of the wild Pacific salmons, but countries that farm the fish tack on their national label: Scottish salmon, Norwegian salmon, etc. The fish are typically raised in large, floating net-pens, often in open bays, to help give them a “natural” flavor. The adult Atlantic salmon is a handsome, silver-skinned fish with distinct black cross-like spots over the body and head and above the lateral line. It closely resembles the Pacific coho. Farmed Atlantics start at 4 pounds, but fish up to 18 pounds are available.
The flavor of Atlantic salmon is milder than that of the wild salmon species. The meat is moderately firm and oily, though not as fatty as that of the wild chinook, or king, salmon.The flesh color varies, depending on the amount of pigment in the feed, but generally Atlantics’ meat is a rich orange or pinkish-orange color. The fatty meat appears almost marbled when raw. Atlantic salmon retains its color when cooked and has a large, moist flake.
Fillets of Atlantic salmon are pleasing to the eye and should be used with recipes that show off the fish. With the Atlantic salmon’s delicate flavor, avoid accompanying flavors that overpower the fish. A light dill-and-yogurt or cucumber-dill sauce works well, and sliced cucumbers and new potatoes are ideal companions.
Other salmon, Rainbow trout

Mattes Seafood has been working with Libertore’s in Perry Hall for years. The service provided by Michael Mattes and his company are always exceptional. We have never incurred any problems, we know we can always call even if it is last minute and we will be taken care of. We couldn’t ask for a more reliable vendor. All of their products are always delivered fresh and they are completely able to meet our needs! We are more than happy with the service provided and would love to continue to work wi… END_OF_DOCUMENT_TOKEN_TO_BE_REPLACED