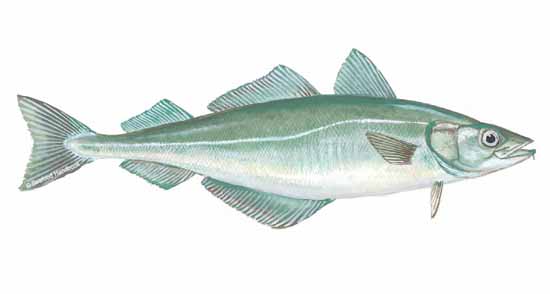 Alaska pollock is a member of the cod family, reflected by some of its other names: bigeye cod, snow cod and tomcod. Once dismissed as cod’s poorer cousin, the pollock has come into its own as a valuable resource, a global commodity and a popular item (credited or not) on menus around the world. Alaska pollock is among the most ubiquitous of North Pacific groundfish, ranging from California to Alaska and across the Aleutians to the waters of Russia, China and Japan. The bulk of the catch comes from the Bering Sea, the Gulf of Alaska and Russia’s Sea of Okhotsk. In the United States, pollock are harvested by factory trawlers that process at sea and by catcher boats that deliver to shore-based processors. Many operations produce both surimi and single-frozen block products from pollock. Alaska pollock weigh 1/2 to 2 pounds and average 12 to 20 inches in length. Fillets average 2 to 3 ounces. Larger fillets of 4 to 6 ounces are available in the fall.
Pollock is a mild, delicate-tasting fish, with a slightly coarse texture. Some find it more flavorful than cod or haddock, perhaps because it has a higher oil content. Boneless Alaska pollock fillets are creamy tan in color. Cooked, the lean, moist meat is white and firm, with a nice flake.If you need a white fillet, your odds are much better with single-frozen vs. twice-frozen pollock, which is often grayer. Additionally, deep-skinned (i.e., fat line removed) pollock offers a whiter, more “cod-like” portion.
While this versatile whitefish is commonly used in surimi and fried-fillet sandwiches, it can hold its own in gourmet preparations. Alaska pollock is an ideal substitute for cod, though pollock fillets are smaller. Because of the higher fat content, it should be cooked slightly longer than cod or haddock. Pollock’s delicate taste is easily complemented with herbs, spices and light sauces.
Cod, Haddock, Flounder

Mattes Seafood has been working with Libertore’s in Perry Hall for years. The service provided by Michael Mattes and his company are always exceptional. We have never incurred any problems, we know we can always call even if it is last minute and we will be taken care of. We couldn’t ask for a more reliable vendor. All of their products are always delivered fresh and they are completely able to meet our needs! We are more than happy with the service provided and would love to continue to work wi… END_OF_DOCUMENT_TOKEN_TO_BE_REPLACED