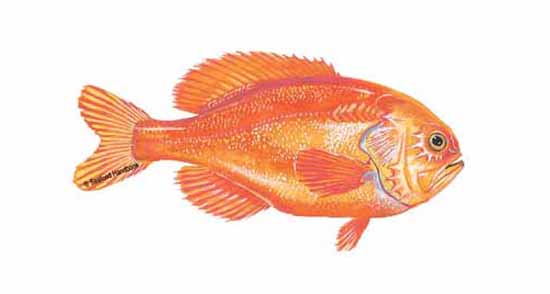 This species was first fished commercially off New Zealand, and then later off of Australia. It was the New Zealanders who launched the marketing effort for the fish formerly known as slimehead — a distinct marketing handicap. After the Kiwis persuaded the Food and Drug Administration to allow use of the name orange roughy, it soon become New Zealand’s most valuable finfish species. The fish is distinctive, with its bright-orange skin, spiky fins and bony head. Orange roughy averages 3 1/2 pounds, and the fillet size is generally 6 to 8 ounces. Roughy is a deepwater species taken by trawls at depths of up to 700 fathoms. In such a cold and pressurized environment, mating is not a frequent activity. Additionally, the average age of roughy caught in commercial fishing nets is from 30 to 50 years, which translates into a slow replacement rate and a high susceptibility to overfishing.
Orange roughy has a mild, delicate flavor and moist, large-flaked meat that holds together well after cooking. Raw orange roughy flesh is pearly white, and it cooks up to an opaque white.The skin side of the fillets often sports a faint, orange-brown band of color. With roughy, the darker the meat, the lower the quality.
The meat of the orange roughy is tolerant of most cooking methods, except deep frying and grilling, and works well with almost any seasoning or sauce. Orange roughy has a moderate oil content, which helps the meat retain moisture during cooking. Though some product is frozen twice (once aboard the boat and again after skinning and filleting), roughy maintains its quality remarkably well if frozen properly.
Ocean perch, Cod, Haddock

Mattes Seafood has been working with Libertore’s in Perry Hall for years. The service provided by Michael Mattes and his company are always exceptional. We have never incurred any problems, we know we can always call even if it is last minute and we will be taken care of. We couldn’t ask for a more reliable vendor. All of their products are always delivered fresh and they are completely able to meet our needs! We are more than happy with the service provided and would love to continue to work wi… END_OF_DOCUMENT_TOKEN_TO_BE_REPLACED