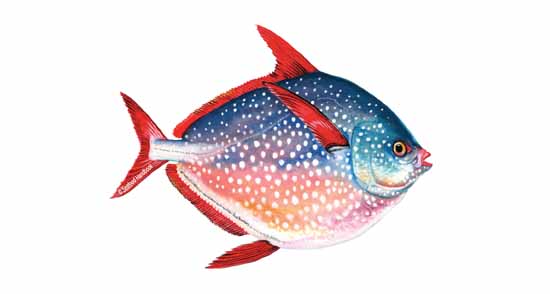 Years ago, opah was thought to bring good luck, and Hawaiian fishermen gave the fish away as a goodwill gesture. But there was also a time when seafood suppliers could find no takers for the moonfish, likely named for its round profile. Opah’s popularity finally blossomed in the late ’80s when the state of Hawaii started promoting its underutilized species, and U.S. consumers acquired a taste for more boldly flavored fish. Opah isn’t consistently available, since the species doesn’t school and isn’t easily harvested in quantity. While known primarily as a Hawaiian species in the domestic market, opah is found worldwide in tropical and temperate waters. It is often taken as bycatch by longliners targeting tuna from New Zealand to California and also is harvested off the California coast. Opah is imported into the U.S. market predominately from Fiji, Tahiti and New Zealand when domestic supplies are low. In earlier scientific references, opah was classified as Lampris regius.
One opah has four types of flesh, each a different color. The tender meat of the loin, which runs along the backbone from eye to tail, is a light salmon-orange. The less-tender, stringy side flesh is the same color as the loin at the top but becomes paler at the bottom. The cheek meat is dark red. All cook up white except for the bright-red breastplate meat, which turns brown.Opah has a rich, creamy taste and firm, fatty texture. The flavor is a cross between tuna and swordfish — distinctive but not overpowering.
The opah’s large-grain, fatty flesh offers a versatility of use that appeals to chefs. It also works well with assertive sauces. The loin yields steak-like fillets that are good for grilling, broiling or sautéing. Opah top loin meat makes excellent sashimi. The rest is too fibrous to be good raw but becomes very tender when cooked.
Tuna, Swordfish

Mattes Seafood has been working with Libertore’s in Perry Hall for years. The service provided by Michael Mattes and his company are always exceptional. We have never incurred any problems, we know we can always call even if it is last minute and we will be taken care of. We couldn’t ask for a more reliable vendor. All of their products are always delivered fresh and they are completely able to meet our needs! We are more than happy with the service provided and would love to continue to work wi… END_OF_DOCUMENT_TOKEN_TO_BE_REPLACED