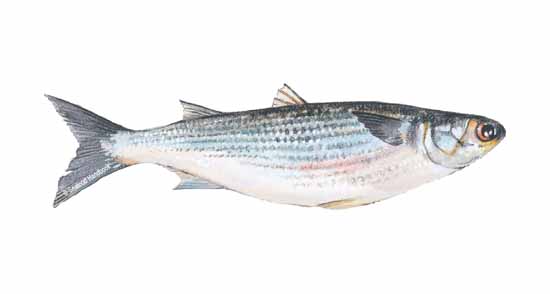 More than 100 species of mullet are found worldwide in estuaries and the open ocean. In the United States, particularly in Southeast regional cuisine, the striped mullet is the species of choice, prized as much for its roe as for its flesh. The red roe is a valuable export product for markets in Japan and Taiwan. Striped mullet are found from North Carolina to Texas. Florida accounts for most of the U.S. commercial harvest, which has been decimated by net bans. Despite its popularity in the Southeast, striped mullet remains fairly unknown in the rest of the country. Quality is dependent on freshness, so most mullet is consumed in the region where it’s landed. Don’t confuse striped mullet with the renowned red mullet, or rouget, of French cuisine; the red mullet (Mullus surmeletus) is a member of the goatfish family Mullidae, while the striped mullet is in the Mugilidae family.
Mullet has a rich, nutty taste. Its high oil content and flavor have earned it the nickname “Biloxi bacon.” The raw flesh is white and cooks up white, firm and juicy. A dark, lateral line of fatty flesh runs through the meat and can impart a stronger flavor. To prevent this, skin the fish and remove the line.Because mullet is oily, careful handling and fast turnover are necessary; even frozen, the shelf life is just 90 days.
The high oil content of mullet makes it a good candidate for charcoal grilling and hot smoking. Floridians and Cajuns split mullet and roast it over hickory fires. It can also be stuffed and baked or pan-fried. For a milder flavor, skin fillets before cooking. In European-style recipes that specify mullet, don’t use the domestic species; substitute ocean perch, unless you have access to true European red mullet.
Mackerel, Pompano

Mattes Seafood has been working with Libertore’s in Perry Hall for years. The service provided by Michael Mattes and his company are always exceptional. We have never incurred any problems, we know we can always call even if it is last minute and we will be taken care of. We couldn’t ask for a more reliable vendor. All of their products are always delivered fresh and they are completely able to meet our needs! We are more than happy with the service provided and would love to continue to work wi… END_OF_DOCUMENT_TOKEN_TO_BE_REPLACED