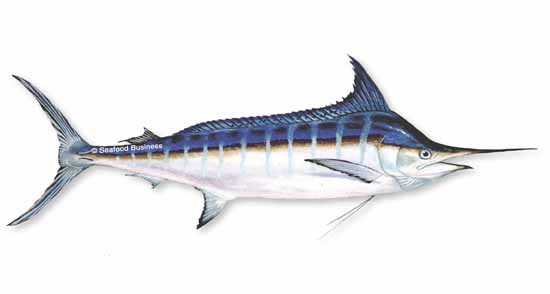 A giant blue marlin was the Cuban fisherman’s quarry in Ernest Hemingway’s classic novella The Old Man and the Sea. The carcass of Santiago’s marlin measured 18 feet in length. While blue marlins are the largest of the marlin species and prized by anglers for their fighting nature, the average landed size is 11 feet and from 200 to 400 pounds. Pacific blue marlin (Makaira mazara) are generally larger than the Atlantic strain; ancient Hawaiians feared the fierce fish, which they called kajiki, because a jab from its heavy bill could easily sink a fishing canoe. Known as a blue-water fish, since it spends most of its life at sea, the blue marlin is found in temperate and tropical waters worldwide. The popular gamefish is also taken incidentally in gillnets. In the Atlantic, U.S. commercial fishing vessels are prohibited from possessing blue marlin, but Hawaii has a commercial longline fishery for the species. Peak landings are from June to October.
Raw marlin flesh varies but is generally a light golden-orange when raw. It turns off-white when cooked, somewhat lighter than swordfish.Marlin has a firm, meaty texture, similar to that of swordfish, and a rich, full flavor. There’s a lot of tough, stringy connective tissue between the muscle layers in large marlin (150 pounds-plus), which can be avoided by buying smaller fish.
Marlin steaks are ideal for simple, high-heat cooking methods like grilling or broiling. The rich taste can be savored with plain seasonings like salt and pepper or a squeeze of lime, and it also holds its own with more boldly flavored sauces, salsas or pungent herbs. Raw, top-quality marlin can be used for sashimi or seviche.
Tuna, Swordfish

Mattes Seafood has been working with Libertore’s in Perry Hall for years. The service provided by Michael Mattes and his company are always exceptional. We have never incurred any problems, we know we can always call even if it is last minute and we will be taken care of. We couldn’t ask for a more reliable vendor. All of their products are always delivered fresh and they are completely able to meet our needs! We are more than happy with the service provided and would love to continue to work wi… END_OF_DOCUMENT_TOKEN_TO_BE_REPLACED