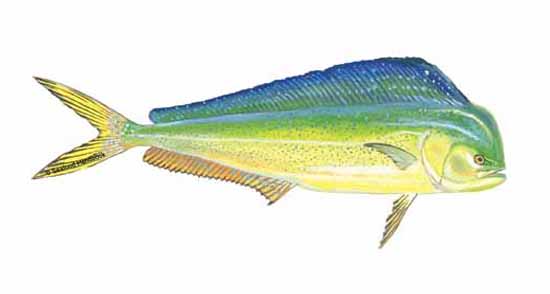 Mahimahi is the Hawaiian name for dolphinfish. The Hawaiian moniker came into common use to prevent consumers from confusing this fish with the marine mammal, to which it is unrelated. The alternative name of dolphin-fish came about from the fish’s habit of swimming ahead of sailing ships, as dolphins do. Mahimahi is one of the most beautiful fish in the ocean because of its rich, iridescent colors. The back is an electric greenish blue, the lower body is gold or sparkling silver, and the sides have a mixture of dark and light spots. Although most people associate mahimahi with Hawaii, it is found in tropical and sub-tropical waters around the globe. Initially, mahimahi was a bycatch of the tuna and swordfish fisheries. Today, a directed longline fishery targets mahi. “Clipper” is a term used to denote the highest-quality mahimahi, usually frozen at sea. Occasionally, mahimahi reach 50 pounds, but 5 pounds is the average market weight.
Mahimahi has a sweet, mildly pronounced flavor similar to swordfish. The lean meat is fairly firm in texture, though not steak-like, and it has large, moist flakes.Darker portions of meat can be trimmed away for milder flavor. The raw flesh is pinkish to grayish-white, though dark along the lateral line. Cooked, the meat becomes off-white.
Mahi performs well on the grill. Though it is not an oily fish, the meat remains nicely moist and can hold up even to blackening. Mahi has a thick skin that should be removed before cooking.
Grouper, Snapper

Mattes Seafood has been working with Libertore’s in Perry Hall for years. The service provided by Michael Mattes and his company are always exceptional. We have never incurred any problems, we know we can always call even if it is last minute and we will be taken care of. We couldn’t ask for a more reliable vendor. All of their products are always delivered fresh and they are completely able to meet our needs! We are more than happy with the service provided and would love to continue to work wi… END_OF_DOCUMENT_TOKEN_TO_BE_REPLACED