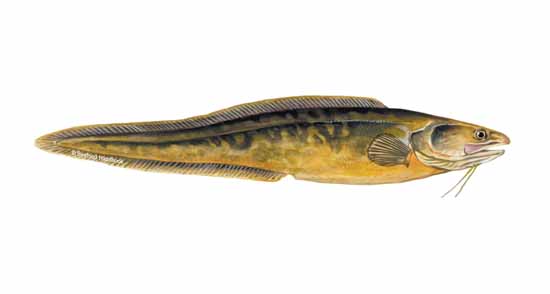 The slender kingklip, a member of the cusk eel family, comprises four species: red (G. chilensis), golden (G. blacodes), South African (G. capensis) and black (G. maculatus). Depending on the species, kingklip can reach 5 to 6 feet long and 50 pounds, but most found on the market average 10 pounds. Kingklip are found in waters as deep as 250 fathoms off South Africa, New Zealand and Australia as well as off the coasts of Argentina and Chile. They are caught mostly by trawlers, often as a bycatch, and by hook and line. In Europe, kingklip is marketed as cusk eel. In New Zealand it is called ling, and in South America, congrio (cusk eel). Golden, red and black kingklip are marketed internationally, but the U.S. market prefers golden and red.
Red is considered best of the kingklips for flavor and texture. Raw meat of red and golden kingklip is creamy white, sometimes with a yellowish tinge. It cooks up white. Black kingklip has darker meat that also cooks up darker. Black kingklip fillets are also narrower than red and golden fillets.The flavor is mild and slightly sweet. The texture is dense but tender with a good, large flake. Black kingklip is not as tender as the other two.
A traditional seafood in South America, kingklip is the main ingredient in caldillo congrio, a spicy, Chilean-style bouillabaisse. The fish works well in soup and stews, because the dense meat holds together. The meat’s density also means that it takes longer to cook than other types of whitefish. Fillets, which range from 1 to 4 pounds, lend themselves to almost any cooking method.
Cod, Ocean perch, Orange roughy

Mattes Seafood has been working with Libertore’s in Perry Hall for years. The service provided by Michael Mattes and his company are always exceptional. We have never incurred any problems, we know we can always call even if it is last minute and we will be taken care of. We couldn’t ask for a more reliable vendor. All of their products are always delivered fresh and they are completely able to meet our needs! We are more than happy with the service provided and would love to continue to work wi… END_OF_DOCUMENT_TOKEN_TO_BE_REPLACED