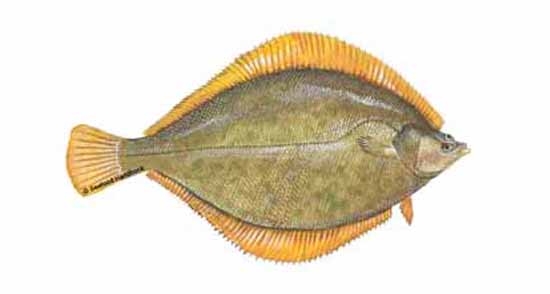 Around 540 flatfish species belong to the taxonomic order Pleuronectiformes, meaning “sideswimmer.” Flatfish are found throughout the world, though the most commercially important family, Plueronectidae, is concentrated in northern waters. Yellowtail is the most important Atlantic Coast flounder, and petrale sole is the most important West Coast species. Flatfish have both eyes on one side of the head, though they begin life as normal fish. As they become bottom dwellers, one eye migrates to the other side, resulting in “right-eyed” and “left-eyed” flatfish. Soles and flounders harvested commercially in North America are right-eyed, except fluke. Flounder fillets vary in shape, depending on the species. Gray sole offers long, slender fillets; yellowtail flounder, rock sole, lemon sole, fluke and dab offer thicker, broader fillets.
Raw flounder ranges from tan to pinkish to snow white, but cooked meat of all species is pure white, lean, boneless and flaky with a mild flavor, ranging from bland to sweet. Taste and texture vary, depending on species. Petrale sole, with firm, delicate-tasting flesh, is considered the premier Pacific sole. Pacific Dover, with softer flesh, is a lesser-quality product. Cooked meat of smaller soles and flounders is delicate, while larger species like fluke or dab are firm and meaty.The sweet taste and firm texture of yellowtail flounder is often regarded as the standard to which other flounders are compared. Lemon and gray sole aren’t far behind.
Use wine, sauce, other liquids or moist vegetables to keep thin flatfish fillets from drying out. Avoid sauces and herbs that overpower their delicate taste. Thicker fillets are great for broiling, served with lightly herbed butter. The firm and meaty flesh of larger species like fluke or dab is good for rolling or stuffing. Small H&G sole — like rex or gray — can be grilled, baked or stuffed, but not filleted, because fillets would be too small.
Other thin whitefish fillets

Mattes Seafood has been working with Libertore’s in Perry Hall for years. The service provided by Michael Mattes and his company are always exceptional. We have never incurred any problems, we know we can always call even if it is last minute and we will be taken care of. We couldn’t ask for a more reliable vendor. All of their products are always delivered fresh and they are completely able to meet our needs! We are more than happy with the service provided and would love to continue to work wi… END_OF_DOCUMENT_TOKEN_TO_BE_REPLACED