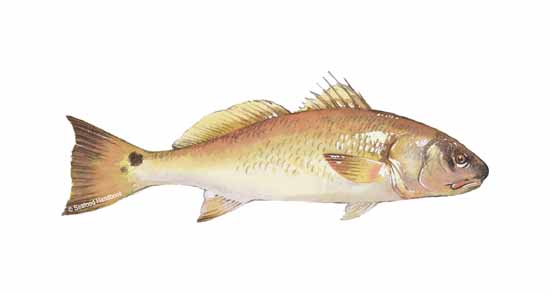 Dozens of drum species are found in tropical waters of the Atlantic and Pacific oceans and in the Gulf Mexico. Of greatest value in a niche U.S. market are the red drum and black drum, named for the loud drumming noise they make by contracting muscles connected to their air bladders. Red drum is the species of blackened redfish fame, overharvested to the point of closing the U.S. fishery. It is now imported from Mexico, Argentina, Ecuador and Central America and commands high prices. Farmed product from Texas, Taiwan and Ecuador supplements limited wild supplies. Demand has shifted to the more plentiful, lower-priced black drum, found from Virginia to the northern Gulf of Mexico, though restrictions on commercial fishing have tightened supplies of this species as well.
The flesh of small, very fresh red drum has an almost emerald-green tint. Meat of larger red drums is white with a red tint. The raw flesh of black drum is whiter, though that of both species cooks up snow white.Both the red and black drum have a sweet, mild flavor and firm, moist flesh, similar to snapper in texture. Some think the small “puppy” drums are sweeter and flakier than the larger “bulls.” Black drum meat is coarser than red drum.
Black and red drum can be used interchangeably, though black drum is more meaty and can hold up under almost any cooking method. Meat from larger drums is especially good in chowders or bouillabaisse. Drums carry trematode parasites, so they must be cooked to an internal temperature of 145°F. It’s not a fish you’d want to use for sashimi or ceviche.
Mullet, Snapper, Croaker

Mattes Seafood has been working with Libertore’s in Perry Hall for years. The service provided by Michael Mattes and his company are always exceptional. We have never incurred any problems, we know we can always call even if it is last minute and we will be taken care of. We couldn’t ask for a more reliable vendor. All of their products are always delivered fresh and they are completely able to meet our needs! We are more than happy with the service provided and would love to continue to work wi… END_OF_DOCUMENT_TOKEN_TO_BE_REPLACED