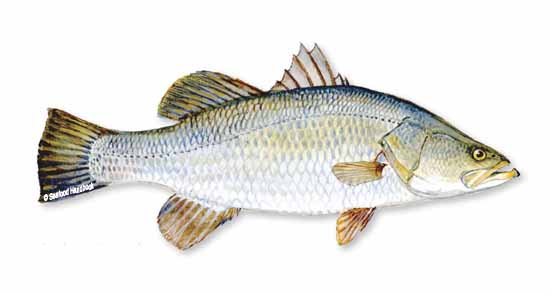 A relative newcomer to the U.S. seafood market, barramundi is finding a place both at high-end restaurants and mid-scale retailers, where its versatility and eco-friendly reputation have earned it a following. Australia’s Aborigines dubbed this species barramundi, meaning river fish with large scales; it spends most of its life in rivers, migrating to estuaries to breed and then returning to its original river system. A member of the sea bass family, barramundi is native to Australia’s northern tropical waters and parts of Southeast Asia. Farms and wild fisheries supply the growing global market. The hardy barramundi can grow to market size of 1.5 to 2 pounds in less than a year, making it well suited for aquaculture. Farming of this species started in Thailand in the 1970s and spread throughout Southeast Asia, in small, coastal cage operations. Barramundi also is raised in Australia, Malaysia, Thailand, the Philippines and Vietnam and in the United States at facilities in western Massachusetts and Florida. An Australian company is farming barramundi in open-ocean cages off the Marshall Islands. The world’s biggest supplier is Indonesia, where production is mainly 5- to 10-pound barramundi from wild fisheries.
Raw flesh is pearly pink; cooked meat is white.Barramundi has a firm, moist texture and large flakes. The fish is prized for its sweet, buttery flavor. Small barramundi are milder in flavor than larger fish. The few bones in the fish are large and easily removed.
Barramundi is a versatile fish and has a high enough oil content to keep the flesh moist while cooking. The sweet, mild flavor lends itself to a wide range of sauces and spices. Try grilling whole barramundi to serve with a dill-and-lemon butter sauce. The fish is also excellent pan seared with the edible skin, which crisps up nicely. Aborigines wrap barramundi in the leaves of the wild ginger plant and bake it in hot ashes for a traditional preparation.
Striped bass, Red snapper, Grouper

Mattes Seafood has been working with Libertore’s in Perry Hall for years. The service provided by Michael Mattes and his company are always exceptional. We have never incurred any problems, we know we can always call even if it is last minute and we will be taken care of. We couldn’t ask for a more reliable vendor. All of their products are always delivered fresh and they are completely able to meet our needs! We are more than happy with the service provided and would love to continue to work wi… END_OF_DOCUMENT_TOKEN_TO_BE_REPLACED