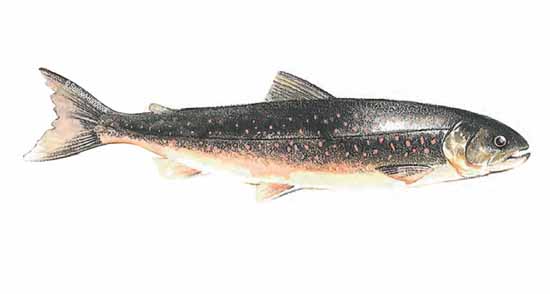 Arctic char is a member of the trout and salmon family, and it physically resembles the salmon. Its silvery skin is dappled with pink along the lateral line, and the fish sports green and blue coloration on its back and upper sides. Arctic char is also anadromous like salmon, migrating from northern lakes to saltwater to spawn. But, instead of dying afterward like its salmon cousin, the char can live for 25 years. The Inuit of Canada have enjoyed char for hundreds of years; they freeze the fish and eat them like Popsicles. Wild-harvested char come from remote, icy waters of Europe, Asia and North America. Northern Canada is the prime supplier, with Iceland close behind. These two are also the major suppliers of farmed char. The typical market size for the fish is between 2 and 8 pounds. Some farms raise pan-sized fish weighing 8 to 10 ounces. In Canada, gillnets, weirs and trap nets are used to harvest wild Arctic char.

Arctic char has distinctive flavor, somewhere between that of salmon and trout, but closer to trout. The meat is moderately firm but has a finer flake than either salmon or trout. A high fat content keeps it moist. Flesh coloring ranges from deep red to pale pink. The taste is the same, regardless of the meat’s color. Arctic char, like other anadromous fish, can have parasites, which are killed by proper freezing or cooking.
Arctic char’s flavor appeals to people who enjoy trout but find salmon too strongly flavored. In general, cook char as you would trout. Fillets and steaks can be broiled or cooked on the grill, while whole fish can be baked or poached. The skin becomes thick and leathery after cooking, so it’s best to remove it before serving. The oil content makes char also a good candidate for smoking — use either the hot or cold method.

Mattes Seafood has been working with Libertore’s in Perry Hall for years. The service provided by Michael Mattes and his company are always exceptional. We have never incurred any problems, we know we can always call even if it is last minute and we will be taken care of. We couldn’t ask for a more reliable vendor. All of their products are always delivered fresh and they are completely able to meet our needs! We are more than happy with the service provided and would love to continue to work wi… END_OF_DOCUMENT_TOKEN_TO_BE_REPLACED